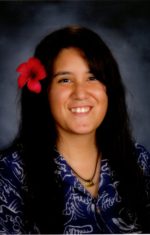 “Last school year I served as a ukulele teacher/ general music teacher/ after-school choir instructor. I’m super excited to share that one more element is being added to my list for next year, and I am becoming a middle-school band teacher!”

Lani is is a multi-instrumentalist, vocalist and educator from Tucson, Arizona and Honolulu, Hawaii. She graduated from the University of Arizona in 2018 with a BA in Music – Integrated Studies, double minor in Film/Television Studies and Japanese Language.

After graduating from the University of Arizona, Lani returned to Honolulu where she continued her studies and pursuit in music. In July 2018, Lani participated in the Summer Taiko Intensive hosted by Taiko Center of the Pacific, under the direction of Kenny and Chizuko Endo. After taking part in the program, Lani continued to study in the Kenny Endo Taiko Ensemble. In December 2019, she completed her training and became a performing member of the group. From there, Lani has had opportunities to perform not only as a taiko player, but also as a hula and Tahitian dancer.

In July 2019, Lani became the ukulele teacher, choir instructor, and general music teacher at Holy Family Catholic Academy in Honolulu. (Their mascot is also the wildcat!) In her first year, she took her ukulele students to perform at Ala Moana Center to welcome the holiday season and give them an opportunity to perform outside of the school for the first time in several years. In March 2020, Lani took the HFCA Choir to the Hawaii Catholic Schools Choral Festival where they sang for and alongside 11 other elementary/intermediate schools in the Diocese of Honolulu. Then, just yesterday, Lani added one more feather to her cap and is about to step into her first year as their band teacher.

While she has been teaching and performing, Lani has also served as a song leader and music judge for the annual Nanakuli Song Festival. This festival is a competition between each of the intermediate/high school classes where they sing an acapella song in the Hawaiian language with different themes for each song every year. She is looking forward to what the students will showcase in 2021.

In addition to all of her work over the past two years, Lani has sung the U.S. National Anthem and “Hawai’i Pono’I” (The Hawaii State song) for many ceremonies at Joint Base Hickam Pearl Harbor. In June 2020, she was coined by former 15th Wing Commander Col. W Halsey Burks.

About her experience at the University of Arizona, Lani shares:

“The Fred Fox School of Music gave me a place where I could be myself and feel comfortable in my own skin. Each of my instructors were not only encouraging of my dreams and ambitions, but they pushed me to be the best that I could be each day. Even when times were tough, every single one of them believed in me. Whether it was marching band, orchestra, or choir, I had a blast doing all of it.

My absolute favorite memory was putting my senior recital together. “7 Colors” in May 2018 was a dream turned into reality where I got to take everything I knew, loved, and learned in music and share that with many colleagues and friends from different walks of life.

To anyone who is currently attending school, if you have any crazy and whacky musical ideas, act on them! Trust me. I had toy instruments in my senior recital. Aloha and Bear Down!”