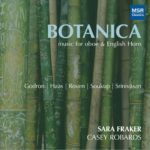 Exploring intersections between the human and botanical worlds, BOTANICA is a musical entry point into current conversations around environmental and social justice. The six pieces on the album are interrelated by threads of common themes and origins: spiritual ecology, poetic text, and resistance to injustice. All works are world premiere recordings, with the exception of the Pavel Haas Suite, a masterpiece of the oboe repertoire just beginning to gain full recognition.

Asha Srinivasan’s Braiding is a ten-minute piece for oboe, electronics and natural sounds, inspired by Robin Wall Kimmerer’s book, Braiding Sweetgrass: Indigenous Wisdom, Scientific Knowledge, and the Teaching of Plants. Elegy for Oboe and Piano, also commissioned for this album, is one of Glen Roven’s final compositions before his sudden passing in the summer of 2018. It ends poignantly with an original chorale in the style of Bach, haunted by fleeting oboe embellishments. This chorale finds echoes in Pavel Haas’ persistent treatment of the Wenceslas chorale, the most enduring musical symbol of Czech nationalism. It is likely that Haas originally composed the Oboe Suite for tenor voice, with an anti-fascist text so dangerously political that he ultimately decided to give the vocal line to the oboe instead. The oboe melody is often recitative-like, tones shaped around the ghostly forms of secret, vanished syllables. In the Four Songs, composed in the Terezin concentration camp, the original bass voice is re-imagined as a solo English horn line. Musically, the Suite and the Songs are inextricably linked, making this new transcription for English horn and piano a natural fit. The Oboe Sonata by Soukup, though from a later era, retains the intensity of Czech post-tonal language. Godron’s whimsical Suite Bucolique finds its home here among music rich with allusions to woodland trees and bamboo forests.

Student Spotlight!
Violist Raiden Thaler is pursuing a Master of Music degree at the University of Arizona under the tutelage of Dr. Molly Gebrian. He recently graduated from Florida State University magna cum laude as a National Merit Finalist majoring in viola performance, where he studied under Dr. Pamela Ryan. Raiden has completed additional solo and chamber studies with Charles Castleman, Patricia McCarty, George Taylor, John Kochanowski, Basil Vendryes, Corinne Stillwell, Greg Sauer and Tomoko Fujita. He has performed solo works in masterclasses with Bruce Owen, Csaba Erdélyi, Erika Eckert, Catharine Carroll Lees, and both Almita and Roland Vamos at the 2018 ASTA National Conference. Chamber masterclasses include the Badke Quartet, the New Zealand String Quartet, Thomas Kraines of the Daedalus Quartet, and the Telegraph Quartet. Raiden has also studied at numerous summer and winter festivals, including Castleman Quartet Program, Lyricafest, Kinhaven Young Artist Seminar, Meadowmount School of Music, and the Ithaca College Summer Music Academy. Currently, he is principal viola of the Arizona Symphony Orchestra and a new member of the Grove String Quartet, the Graduate String Quartet at the University of Arizona under the mentorship of Professor Tim Kantor. ... See MoreSee Less