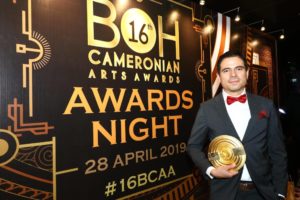 The Fred Fox School of Music congratulates distinguished alumnus Juan Montoya, who was recently awarded a “Cammie” at the 16th BOH Cameronian Art Awards, the most prestigious performing arts awards in Malaysia. Montoya has been the resident conductor of the Kuala Lumpur City Opera since 2014. Last year’s season-closing opera, “Madama Butterfly,” was nominated in six categories, one of them for Best Musical Director. Montoya accepted the award at the ceremony last Sunday, which ended up being the second of two awards that his production obtained during the gala.

Montoya graduated from the University of Arizona in 2018 with a Doctor of Musical Arts degree in orchestral and opera conducting as a student of Dr. Thomas Cockrell.

Bravo, Dr. Montoya! You continue to make us proud!