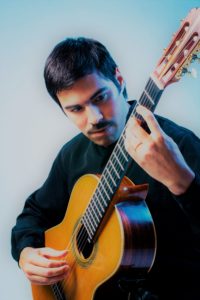 Andrés Pantoja’s project “Extended Techniques for the Classical Guitar in Chile,” was selected for a Tinker Field Research Grant in the amount of $2000 to cover travel and field-related expenses for pre-dissertation work in Chile. The selection committee reviewed an unusually large number of competitive applicants this year. His project
was chosen based on quality, feasibility, and potential impact, in addition to meeting Tinker eligibility criteria. Congratulations Andrés!

Andrés Pantoja will conduct preliminary research for his doctoral dissertation on the use of extended techniques in Chilean music for guitar from the last 30 years.

Extended Techniques (ETs) refer to novelty sounds produced by traditional instruments played in a non-traditional fashion that “increase the expressive range of instruments.”  ETs for guitar have been used as part of the palette of resources for many composers around the world since the second half of the twentieth century, and they have been widely studied by many scholars who have provided extensive publications about their musical notation and interpretation. However, there is no information about ETs in the Chilean repertoire for two primary reasons: 1) the repertoire is very recent and, 2) many works have not been published yet and remain in private libraries. With support from the Tinker foundation, his aim is to conduct fieldwork that will allow me to fill this gap in current guitar literature.

Andrés Pantoja, from Chillán, Chile, started his guitar studies at the age of 13, with Edith Vásquez, his mother. He then continued his undergraduate studies at the Pontificia Universidad Católica de Chile, with Professor Oscar Ohlsen. After receiving his diploma in Guitar Performance, he studied for one year with Professor Luis Orlandini. He completed his master’s in performance (MM) in the Bolton Guitar Studies Program at the University of Arizona, with Professor Thomas Patterson. Currently, Pantoja is pursuing his Doctor of Musical Arts degree.

Andrés has recorded 7 CDs; premiered the Concerto for Guitar and Orchestra called Y truncaron tu canto by Victor Ortiz; played in his home country with four prominent orchestras; in 2010 toured along with Ensemble Nuevo through Brazil, Colombia, Argentina, Venezuela, Bolivia, Uruguay and Chile. At the University of Arizona, he won the: “36th Annual Memorial Guitar Competition: N. D. Sholin” (2017), a “Stephan Connor” guitar, the grand prize in the “15th Annual Beeston Memorial Guitar Competition” (2017), “David Russell Bach Prize” (2019), and the Schulman Prize (2017). In addition, he won two Chilean CONICYT Scholarships to study for both his Masters and Doctoral degrees.