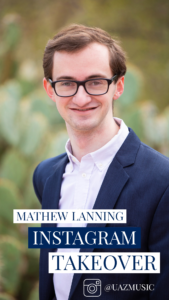 Mathew will be taking over the @UAZMusic Instagram and Facebook stories today (Friday, April 30, 2021)! Tune in to see a day in the life of a Fred Fox School of Music composition student!
https://www.instagram.com/uazmusic/
***
Student Spotlight – Mathew Lanning, BM music composition
Mathew Lanning is a fourth-year music composition student at the Fred Fox School of Music. He is an internationally-performed award-winning composer, pianist, and organist, currently studying composition with Dan Asia, as well as piano with Dr. Dan Linder and organ with Dr. Doug Leightenheimer.
His pieces have been performed by orchestras around the state as well as various professional chamber groups around the United States, including Transient Canvas, the Worcester Chamber Music Society, and the Grammy-nominated Imani Winds. He has studied at programs at the Boston Conservatory and the Curtis Institute of Music and has gained the praise of internationally-renowned composers such as John Corigliano, Robert Beaser, and David Ludwig.
​
After finishing his bachelor’s degree at the University of Arizona, Mathew will be attending the New England Conservatory of Music in Boston to pursue his master’s degree. He would like to strive for a doctorate program afterwards, with the eventual career goal of teaching at a college conservatory.