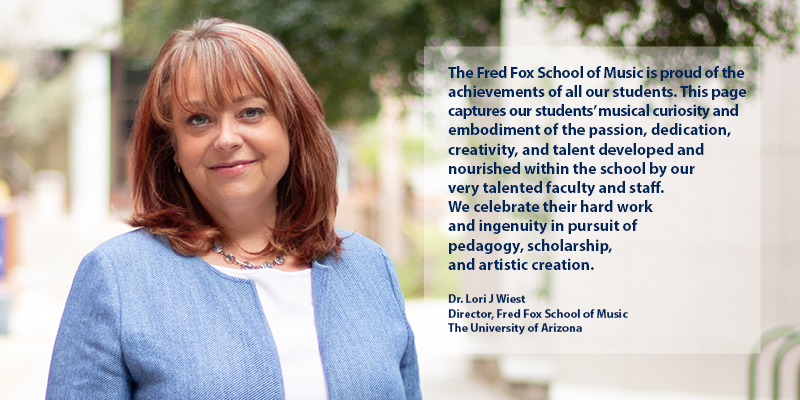 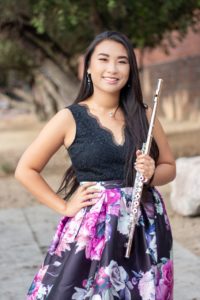 Kaissy Yau is an award-winning flute performance major and UA Honors Scholar whose studies are underwritten by her International Excellence Tuition Scholarship. Her inexhaustible work ethic is evidenced by her success as a performer, maintenance of a 4.0 GPA, impact as a volunteer and instructor of the New Horizons Band, and leadership as the president of the College of Fine Arts Ambassadors and Honors College Partnership through Honors Mentor. She has performed as soloist with various ensembles and has created recordings showcasing not only her musical performance prowess, but also her musical production acumen as a composer, arranger, engineer, and producer. She has masterfully utilized a digital audio workstation for recording and expanding the flute repertoire via her website and social media. Her project is a didactic tool for students in the Fred Fox School of Music as an example of virtual/live performance solutions.

Kaissy’s achievements continue an arc she began as a young performer and athlete. She completed all ABRSM grade level exams and was principal flute of the German Swiss Philharmonic Orchestra and International Concert Orchestra of Hong Kong prior to attending UA.

Dr. Brian Luce remarked about his student, “Kaissy Yau is one of the most enthusiastic and prolific students I have had the privilege of teaching over the past 27 years.” 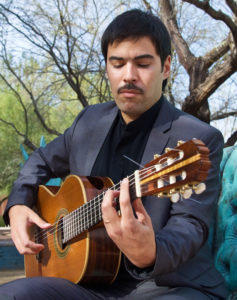 A distinguished student at the Fred Fox School of Music since January 2016, Andrés Pantoja earned a Master of Music degree, and has now completed all of his required academic coursework for the DMA degree with a 4.0 GPA. A winner of multiple awards and competitions, Andrés has always shown initiative and curiosity in developing new projects. His recent CD, Estampa, 21th Century Chilean Guitar, was financed with a highly competitive grant from the Chilean government. In addition, he has recorded two works for the CD, Música de Barrio, a collection of music by Guillermo Eisner in 2019. His creative impulse inspired him to apply for and win the Medici Scholar Award 2020 to create interactive images that accompany the live performances of the aforementioned cycle Platero and I for guitar and narrator, an original staging that will be a wonderful addition to his career and a delight for audiences. His intellectual interest in and resulting commitment to contemporary music has been very strong. This year he won the TINKER Field Research Grant. His project “Extended Techniques for the Classical Guitar in Chile” was supported for pre-dissertation work in Chile.

Professor Tom Patterson remarked about his student, “Andrés is a humble, gracious, and delightful person. He finds the time and energy to be a devoted husband and father to two young boys while doing excellent academic graduate work in a second language and maintaining world-class ability on the guitar.”

What’s it like inside the flute studio at the Fred Fox School of Music … during COVID. Hear professor Brian Luce and students Kaissy Yau and Melissa Requist discuss reentry and playing on stage at Centennial Hall; and see what role kinesiology and biomechanics has with improving flute performance. Arizona Arts Studio Series takes you inside the studios, labs and rehearsal halls at the College of Fine Arts on the University of Arizona campus.