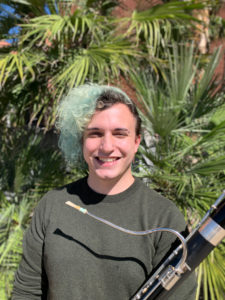 About the audition, Ed said, “This audition was a whirlwind. I felt really grounded by the last time I took an audition, and being more comfortable with how I felt behind the screen. When the personnel manager told me that I had won, it felt unreal.”

Ed is a current MM Student at the Fred Fox School and graduate of the University of Massachusetts Amherst, and the new 2nd bassoon for the West Valley Symphony. Through their time in New England, they enjoyed a rich performing and teaching career across various musical styles, including orchestral, chamber, musical theatre, and opera. Some of their fondest memories were playing alongside world-class soloists in the UMass Amherst Bach Festival’s St. Matthew Passion, and the inaugural performance of TUNDI’s Tristan und Isolde. In 2019, as an attendee at Rocky Ridge Music Center, their wind quintet placed first out of wind chamber groups at the annual chamber music competition. Edward served as the principal bassoon of the New England Film Orchestra, and on roster for the Firebird Pops Orchestra. Now studying under Marissa Olegario, they are excited to plant roots and establish themselves in the Southwest. When not playing bassoon, Ed likes to hang out with Spammy, their cat : ^ )