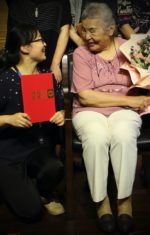 Ziyun Li, a DMA student in the choral conducting program, was one of 14 conductors chosen from 80 applicants to participate in Zheng Xiaoyang’s Conducting Master Class in Changsha, China. From August 17-29, Ziyun was in study nine hours per day, attending historical and cultural lectures, doing score study, having one-on-one conducting lessons and coaching sessions, as well as conducting a final performance. The music studied was mostly Chinese choral works, arrangements of folk songs and contemporary choral works. Zheng Xiaoying is the first female conductor in China and the founder of the first women’s symphony orchestra in China. She is the music director of the Chinese National Opera and the chief conductor of the Xiamen Philharmonic Orchestra. Before her retirement, she also was the director of the conducting department at the Central Conservatory of Music in Beijing. Congratulations on this signal honor, Ziyun!