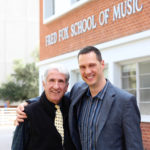 The Fred Fox School of Music is pleased to announce that alumnus Eric Holtan (DMA in Choral Conducting, 2004), has been nominated for two Grammy Awards. Music director and conductor of Tucson-based True Concord Voices and Orchestra, Eric made his Alice Tully Hall debut in September in connection with the True Concord CD release “Far in the Heavens, the Music of Stephen Paulus.” The Grammy Award winners will be announced on February 15, 2016.

Pictured with Eric is his mentor at UA, Dr. Bruce Chamberlain, director of choral activities, associate director of the Fred Fox School of Music and director of the Tucson Symphony Orchestra Chorus. While studying with Chamberlain, Eric was named a finalist in the 2003 American Choral Directors Association National Conducting Competition. The two conductors have remained close, as Eric was for ten years the assistant director of the Tucson Symphony Orchestra Chorus and they have collaborated bringing Chamberlain’s Arizona Choir and Eric’s Tucson Chamber Artists (now known as True Concord) together for a performance of Frank Martin’s monumental Mass for Double Chorus.