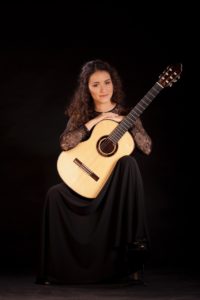 Congratulations to Fred Fox School of Music student Ana Maria Iordache, one of the prize winners of the New York Guitar Competition 2020. From Romania, Iordache is a Master of Music degree candidate studying with Professor Thomas Patterson in the Bolton Guitar Studies Program at the University of Arizona. Earlier this summer, Ana Maria won first prize at Festival International de Guitarra de Madrid 2020. Way to go Ana Maria – keep lifting our spirits with the great news!

Now people are voting for the audience prize which consists of a guitar donated by Guitar Salon International! So if you enjoyed her performance, please help Ana Maria Iordache with a vote here.

Born in Bucharest, Romania, Ana Maria Iordache began playing the guitar at the age of six with Eugen Mang. She received her Bachelor degree in Music Performance within the National University of Music in Bucharest under the tutelage of Conf. Dr. Catalin Stefanescu- Patrascu. In June 2018 she graduated cum laude from Master in Classical Guitar Performance within the University of Alicante, Spain. Currently she is pursuing her Master of Music degree at the University of Arizona with Tom Patterson and artists in residence David Russell, Sergio and Odair Assad. Ana Maria has been awarded numerous prizes in various international competitions, amongst which the first prize in the Festival Internacional de Guitarra de Madrid, Classical Guitar International Competition Sinaia – România,  Eduard Pamfil, Maeştrii Chitarei, European Competition for Young Guitarists – Andrés Segovia Velbert, Germany, second prize in Concurso International de Guitarra Andrés Segovia – Ciudad de Linares 2018, Spain and two in-house competitions at the University of Arizona – Scholin Guitar Competition and Beeston Guitar Competition and third prize in Festival/ Concurso Internacional de Amarante 2019, Portugal. Ana Maria maintained a regular performing career. She was invited to give concerts on most prestigious stages in her home country as well as in Europe (Spain, France and Germany), the United States (Tucson, Patagonia) and Colombia (Bogotá). At the age of 14 she made her debut with the Tirgu Mures Philharmonic at the International Classical Guitar Festival- Tirgu Mures. Her work as a performer includes several chamber music projects. Ana Maria played in various guitar ensembles – duos, trios, quartet and other instruments ensembles- violin, flute, piano and string quartet. In November 2019 she was featured in the performance of the “Concierto Andaluz” by Joaquín Rodrigo for guitar quartet and orchestra, sharing the stage with one of the most acknowledged guitar masters – Pepe Romero – within the first Alumni Congress of Alicante, Spain. She was also invited in several editions to perform for the Science Lectures program at Centennial Hall for an audience of approximately 2000. In 2017 she released her debut album, “Reverie,” produced by the Romanian label E&E Music Production. Ana Maria Iordache plays a guitar made by Constantin Dumitriu.