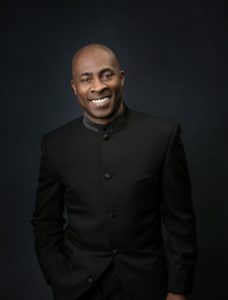 Congratulations to Fred Fox School of Music distinguished alumnus T. André Feagin, who has been appointed band director at Central Washington University! Feagin holds a Doctor of Musical Arts degree in Wind Conducting from the University of Arizona.

Dr. Feagin is the recipient of numerous awards and honors including a 2019-20 national conducting finalist in the professional/college wind band division of the American Prize. In 2011, Dr. Feagin was honored with a proclamation of “Professor T. André Feagin Day” from the Mayor and City Council of El Paso, Texas. In addition, he has served as a teacher resource guide contributing author in four volumes of the Teaching Music Through Performance in Band series (GIA Publications).

Dr. Feagin holds a Doctor of Musical Arts in Wind Conducting from the University of Arizona Fred Fox School of Music where he was a student of Gregg I. Hanson. His doctoral research studies Spanish wind composer Bernardo Adam Ferrero and his wind composition Homenaje a Joaquín Sorolla. He holds a Master of Music in Instrumental Wind Conducting and a Bachelor of Music from the University of Memphis Rudi E. Scheidt School of Music. He is grateful for his teachers and mentors that have shaped his passion for conducting and music. Among them are Eugene Migliaro Corporon, Kraig Alan Williams, Thomas Cockrell, Bruce Chamberlain, Pat Morrow, Darry Pilkington, and James Gholson.

Dr. Feagin’s experience in Drum Corps International (DCI) expands two decades. Previous appointments include serving as brass caption head of the Santa Clara Vanguard and The Academy Drum and Bugle Corps. He has served on the brass staff of the Boston Crusaders, Carolina Crown, and is the former executive director and brass caption head of the 2007 DCI Division III World Champion Memphis Sound Drum and Bugle Corps. As a performing member, he served four-years as conductor of the Phantom Regiment Drum and Bugle Corps. He was the recipient of the DCI Jim Jones Leadership Award in 2000 and the DCI Division III Director of the Year Award in 2007. He continues his involvement in the marching arts serving as a clinician, consultant, adjudicator, music arranger, visual designer, and program coordinator for some of the nation’s finest high school and university band programs.