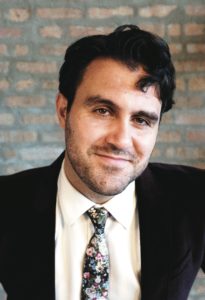 Tenor Edgar Ricaud was born in Nogales, Arizona and grew up in Nogales, Sonora, Mexico. His love for singing began at the age of 13, when a school project was the catalyst for developing his pursuit of music. He then had the chance to perform in various cities in the northern state of Sonora, including joining the ensemble for “Madama Butterfly.” At the University of Arizona, he performed leading tenor roles, such as Guiseppini the in the zarzuela “El dúo de la Africana” and Don Ottavio in the opera production of Mozart’s “Don Giovanni.” Ricaud has also sang in the world premiere of the opera “Illegal Alien,” composed by the Mexican composer Alfonso Molina (a UA alumnus) performed at the University of Arizona in 2014, as well as in Fiestas del Pitic in Hermosillo, Sonora, Mexico.

At Wichita he was part of the opera company Music on Site, performing the role of King Kasper for the opera “Amahl and the night visitors.” He has participated in concerts since then, and has actively performed throughout Mexico, as well as appearances in Vienna, Weimar, Miami, Chicago, Cincinnati, Wichita and Arizona. Most recently he performed the role of Hoffman in the opera production of Offenbach’s “The Tales of Hoffman.” He earned his Bachelor of Music degree from University of Arizona and also a Performance Certificate from Wichita State University. Currently, Ricaud is pursuing a master’s degree at Roosevelt University, where he studies with Judith Haddon.