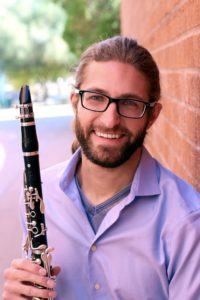 Fred Fox School of Music alumnus Dr. Daniel Becker is a clarinetist, educator, and music theorist based in Valley City, North Dakota and Tucson, Arizona. He shares his Facebook page and website to stay in touch with colleagues, friends and the public.

International soloist Daniel Becker is currently assistant professor of music at Valley City State University in Valley City, North Dakota. Dr. Becker spent five years performing with the Yakima Symphony Orchestra (Washington), including two seasons as principal clarinet of the group. He currently serves as second clarinet of the Greater Grand Forks Symphony Orchestra and has also performed extensively with the Tucson Symphony Orchestra, Fargo-Moorhead Symphony Orchestra and Tucson Pops Orchestra. He has performed and given clinics and master classes throughout the United States and abroad in Costa Rica, Japan, Mexico, and Canada. Also a music theorist and public speaker, Dr. Becker has presented his research and given talks multiple times at the University of Arizona, abroad at the 2ndAnnual Conference for the Study of Progressive Rock in Edinburgh, Scotland, at the 2016 International Clarinet Association Research Competition and at the Symposium of University Research and Creative Expression at Central Washington University. Originally from Henderson, Nevada, Dr. Becker holds Doctor of Musical Arts and Master of Music degrees in Clarinet Performance from the University of Arizona and Bachelor’s degrees in Music Education and Wind Performance from Central Washington University. His teachers have included Jerry Kirkbride, Florie Rothenberg, Joseph Brooks and Felix Viscuglia.