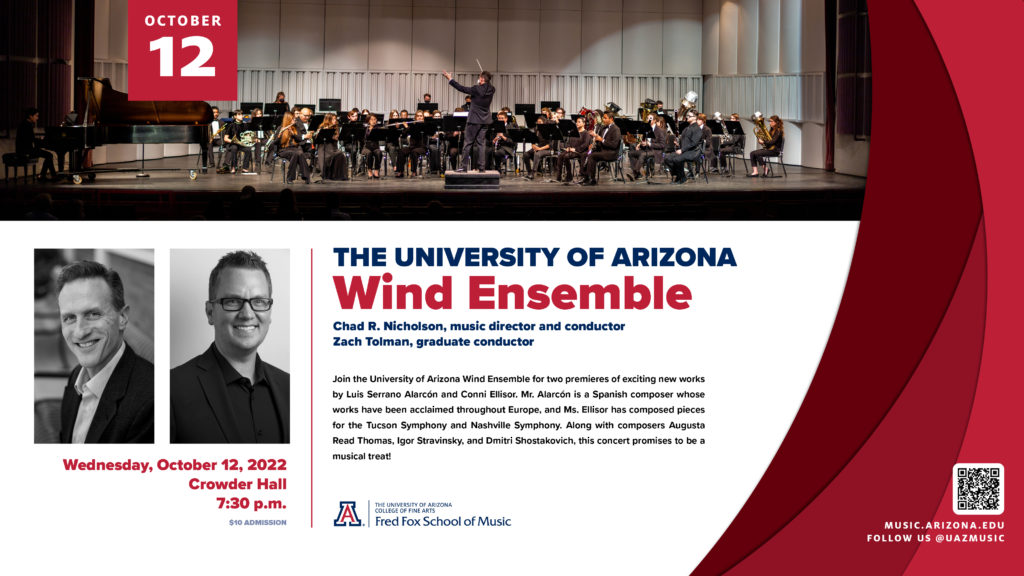 Join the University of Arizona Wind Ensemble for two premieres of exciting new works by Luis Serrano Alarcón and Conni Ellisor. Mr. Alarcón is a Spanish composer whose works have been acclaimed throughout Europe, and Ms. Ellisor has composed pieces for the Tucson Symphony and Nashville Symphony. Along with composers Augusta Read Thomas, Igor Stravinsky, and Dmitri Shostakovich, this concert promises to be a musical treat!

Dr. Chad R. Nicholson, Director of Bands at the University of Arizona Fred Fox School of Music, serves as the conductor of the University of Arizona Wind Ensemble and Chamber Winds. Additionally, he oversees the entire wind band program and instructs undergraduate and graduate wind conducting students. Nicholson has been active in all facets of music education. In 2009, he wrote a book designed to aid conductors in repertoire selection and concert programming titled Great Music for Wind Band.  He is a contributing author for the recently published sourcebook for music educators, Engaging Musical Practices, and he has written articles for eight different volumes of Teaching Music through Performance in Band.

Dr. Nicholson’s experiences as a music educator span all ages and ensemble types. He has conducted many All-State and honor groups around the world. Nicholson is a Chief Guest Conductor of the Beijing Wind Orchestra, China’s first professional wind ensemble. In 2015, he was a member of a distinguished international panel of adjudicators for the All-Chinese Wind Band Contest. Nicholson has worked with ensembles spanning the United States and Asia, from New York’s Carnegie Hall to the National Centre for the Performing Arts in Beijing.

Tolman earned bachelor’s and master’s degrees from the University of Wyoming in Music Education and Saxophone Performance. During his time at UW, Zach was a graduate teaching assistant and graduate conductor with all UW wind and athletic bands, a member of the University’s top ensembles, recorded on two albums with the Wyoming Jazz Ensemble and the UW Saxophone Studio. Tolman competed around the United States in saxophone quartets.

Tolman has presented at conferences across the country and is in demand as a clinician, guest conductor and adjudicator in the Rocky Mountain region.