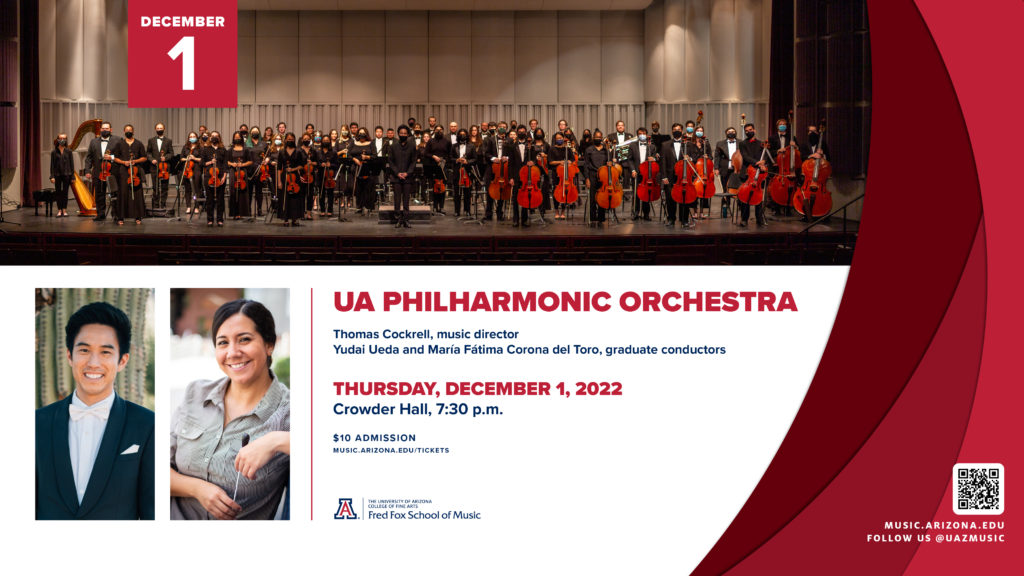 The University of Arizona Philharmonic Orchestra

Yudai Ueda is a DMA orchestral conducting student at the University of Arizona. As the Nelson Riddle Graduate Teaching Assistant, he conducts the UA Philharmonic Orchestra and assists with the Arizona Symphony Orchestra and Opera. In addition, he is the music director for LendAnEar Ensemble and is the assistant conductor for the Tucson Repertory Orchestra.
Previously, Ueda served on the faculty for the University of Arizona Fred Fox School of Music teaching bands, conducting, and music education. As a strong champion of education and community service, he organized UA Band Day and started the UA Conducting Workshop and the UA Regional Etude Workshop. Outside of the university, Ueda has experience conducting honor ensembles, visiting schools as a clinician-conductor, presenting at music conferences, and judging for music festivals.
Before starting the DMA program, Ueda studied orchestral conducting in New York and Vienna. After a conducting fellowship in Vienna, he served as the director of the orchestra program for the Vienna Summer Music Festival and as an assistant conductor for several opera productions.
Ueda received his Master of Music in Instrumental Conducting and Bachelor of Music Education from Northern Arizona University. He is currently studying orchestral and opera conducting with Dr. Thomas Cockrell.

María Fátima Corona del Toro is a doctoral student in orchestral conducting, and a University Fellow recipient from The University of Arizona Fred Fox School of Music. She is originally from Nayarit, Mexico, where she began her studies and love for music.

Ms. Corona graduated with honors in violin performance from the Autonomous University of Baja California, Mexico. She became a music professor at the University of Nayarit, and artistic director and violin coach at Esperanza Azteca Nayarit Symphony Orchestra, where she made her debut as a conductor, becoming the first female conductor of this project nationwide.

In 2020, Ms. Corona pursued an artistic diploma in orchestral conducting at Catholic University of America with Simeone Tartaglione and Murry Sidlin. She served as assistant conductor and violin coach for the DC Concert Orchestra Society, and Maryland Classic Youth Orchestras. Ms. Corona also holds a master’s degree in orchestral conducting from Michigan State University where she studied with Dr. Octavio Más-Arocas and Dr. Katherine Kilburn. She served as assistant conductor of the Opera, M21, Concert, and Symphony ensembles from MSU. During her time in the Michigan area, she also collaborated as an assistant and reader conductor with Jackson Symphony Orchestra, Grand Rapids Youth Symphony as a guest conductor, and Battle Creek Symphony as a guest violinist

She has participated in masterclasses with Benjamin Zander, Carlos Spierer, Ángel Garrido, Alfredo Ibarra, Linus Lerner, David Harutyunyan, and Kenneth Kiesler, among others. Ms. Corona has performed in numerous venues across the US, Mexico, Canada, and Ecuador.

Currently, Ms. Corona is studying orchestral conducting with Dr. Thomas Cockrell, and is an assistant conductor of the Symphony Orchestra, Philharmonic Orchestra and the Opera at The University of Arizona.

The University of Arizona Philharmonic Orchestra