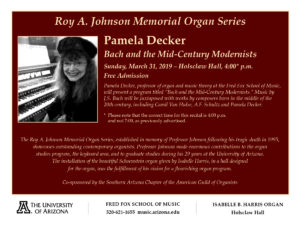 Pamela Decker, professor of organ and music theory at the Fred Fox School of Music, will present a program titled “Bach and the Mid-Century Modernists.” Music by J.S. Bach will be juxtaposed with works by composers active in the middle of the 20th century, including Percy Whitlock, Dan Locklair, Camil Van Hulse and Pamela Decker.

Pamela Decker is professor of organ/music theory at the University of Arizona in Tucson and organist at Grace St. Paul’s Episcopal Church (also in Tucson). Her works for various instruments and/or ensembles are published by Wayne Leupold Editions, C.F. Peters, Hinshaw, Augsburg Fortress, and World Library Publications. As a recording artist she is represented on the Loft Recordings, Albany/Troy, Arkay, Bainbridge, and CRI labels.

Dr. Decker has performed in the United States, Europe, the Baltic Region and Canada. She has been a featured recitalist in many conventions and festivals, including the American Guild of Organists (AGO) National Convention, two AGO regional conventions, the Annual Conference on Organ Music at the University of Michigan, the Twice Festival, the Redlands Organ Festival, Tallinn International Organ Festival and the Festival International d’Orgue de Monaco. Her compositions have been performed in at least nineteen countries and recorded commercially on the Loft, Gothic, ReZound (Loft), Albany, Arkay and Arktos labels.

Leading performers such as Douglas Cleveland (Gothic: Celestial Fire), Janice Beck (Albany 383: Janice Beck Performs Works of Pamela Decker), and Christa Rakich (ReZound: Christa Rakich in Recital at St. Mark’s Cathedral) have recorded major works by Pamela Decker on recordings that have received excellent reviews in many journals. Of the Loft Recordings disc titled Decker Plays Decker: Desert Wildflowers (LRCD 1076), a Gramophone review referred to Decker as “an organist noble in the Bach line…as a composer-performer she falls clearly into the lineage from which Bach and Duruflé are but two points on a long and distinguished timeline.”

In 2011 Decker’s “El Tigre: Concerto for Organ and Orchestra” was world premiered at the combined final concert of the Eastern Music Festival and the Region IV Convention of the AGO in Greensboro, North Carolina, under the baton of renowned conductor Gerard Schwarz, with Edie Johnson as soloist. The concerto is published by Wayne Leupold Editions.

In 2003 Decker’s “Elegy and Dances” for alto saxophone and organ was world premiered at the Moscow-Tchaikovsky Conservatory (Great Hall, where there is a pipe organ) by the commissioning artists, Frederick Hemke (professor of saxophone at Northwestern University) and Douglas Cleveland (1994 first prize winner in the National Young Artists’ Competition in Organ Performance sponsored by the American Guild of Organists, and internationally-known performer). This work has since been recorded by the same artists for a commercial compact disc recording. The saxophone/organ and saxophone/orchestra versions are both published by C.F. Peters.

Pamela Decker holds the Doctor of Musical Arts degree from Stanford University. She has also studied both organ and composition as a Fulbright Scholar in Germany. She has won prizes in national and international competitions as both performer and composer. In 2004 she was awarded the Henry and Phyllis Koffler Prize for Research/Creative Activity at the University of Arizona, and in 2000 she was awarded the College of Fine Arts Award for Teaching Excellence.