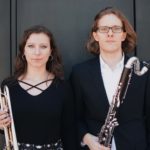 Niloufar Nourbakhsh – My Body My Choice

Kate Amrine – As I Am

Howie Kenty – It Wasn’t Something That We Could Control

Kate Amrine and Ford Fourqurean are Spark Duo, performing premieres for clarinet and trumpet, mixing solos, duos, improvisations, and live electronics. The ensemble has actively commissioned a large repertoire of new works using both multimedia and interactive electronics. In 2019, Spark Duo toured Upstate New York and Vermont performing at Superior Merchandise in Troy and on The Community of Sound series in Burlington. Amrine and Fourqurean have active careers performing in New York City and across the United States. Fourqurean regularly presents guest performances and lectures with Unheardof//Ensemble and Amalgama. Amrine serves on the faculty at New York University and has premiered over 30 pieces both as a soloist and chamber musician. She has released two solo albums exploring social justice themes. Spark Duo is on tour with performances at the University of Arizona, Arizona State University, the Interference series in Flagstaff, AZ, and the University of New Mexico. The program includes a mix of duos by Howie Kenty, Jinhee Han, Kevin Joest, Jacob TV, Ford Fourqurean, and more.

crack | melt examines glaciers as they break apart. The sounds of air, wind, water flowing as these giant objects crack and disappear. The video layers multiple instances glacier melt and pixelates them, obscuring the original images, imitating the process of these concrete objects dissolving and losing form and shape. – Ford Fourqurean

In the spirit of bebop, instrumentalists play most of the piece in pitched unison (adjusted for octave ranges); the effect is an intended blend of awkward note splits and honks as the two work to stay together.This piece is directly inspired by this track, which is inspired by the scratch-king group the X-ecutioners, hence the cheesy name: https://www.youtube.com/watch?v=AqKpzEAROzk – Celka Okajangas

Among my favorite musical adventures are the ones where a friend who’s already deeply familiar with my work asks me to create a piece of it that works for their instrumentation. Pushing Back is one of those pieces—Kate Amrine, a dear friend, came to me seeking a socially relevant piece for Spark Duo that would be a reliable performance piece incorporating electronics. We threw ideas back and forth for awhile but ultimately decided tape would be the best accompaniment for the project. Kate’s one stipulation was ultimately the one that brought the piece to life: that the music and narration exist on a more gender-neutral plane than much of my other work, so neither she nor Ford would feel like the narration couldn’t be about them.

So instead of misogyny and assault, I went with an old standby: Millennial despair. The heart of Pushing Back was born of the frustration I see in my peers, colleagues, and friends when considering our futures. It’s easy to fall into pessimistic (though maybe realistic) thought patterns that tell us if our country doesn’t nuke the world in our lifetimes, chances are good that climate change will do the job anyway. It’s a difficult pill to swallow, but it increasingly seems like the most likely timeline. I won’t spoil the piece, but Pushing Back is about coming to terms not only with all of that but with where our individual futures within structures that aren’t sustainable. – Megan DeJarnett

The crux of the piece comes from the anger and frustration of inaction. At the root of the various specific debates in our society is the very real fear that inaction will allow these events to continue happening unchecked. The 2016 campaign, subsequent election, and its aftermath eventually became a static of television, news, and social media for which volume is at 10 and content is at 1. I wanted to highlight that idea of the cheapness of talk, so while there are only 5 or 6 sources for the tape, they are blended in such a way that only the moments of clarity and substance really are heard. The rest is just voices trying to outspeak each other. On the other side, the trumpet music is all derived from Taps, which serves as a requiem to those who were slain in the too-numerous tragedies. It becomes most recognizable toward the end, as the derivations that are least like the original come at the beginning, creating a sense of movement from distortion to clarity, of many voices into one. Taps is a powerful melody with deep ties to a great many people, and to use it was a deliberate choice to elicit the connotations of death, war, sacrifice, and loss, but also gratitude, action, and of working to uphold beliefs through those actions. The disparity between the empty chatter of the tape and the ultimate sacrifice alluded to by the trumpet is bridged by the quotes from Dominique Christina. Extraordinary in these words is her conviction that the ideas one has and expresses should not be said to be convincing or browbeating. She says “maybe, [if said with enough conviction], these things become instructive, and maybe you find they are also belonging to you.” It’s that sense of belonging as the powerful call to action that inspired the work. – Kevin Joest

erode | submerge explores the concept of shoreline erosion. As waters rise and the elevation of the wave subsumes the shore, the heated sands are obscured and submerged. – Ford Fourqurean

It is actually quite simple. It is my body, and I get to decide what I want to do with it. For centuries such a simple and basic right has been denied to us, all over the world. And today, we are witness to the passage of the most stringent abortion laws in the United States of America. We cannot and must not fail in protecting our most basic right: My Body, My Choice. – Niloufar Nourbakhsh

I wrote this piece and recorded it in September, after being inspired to add my own personal compositional touch to the album. I started writing it by recording myself improvising different versions of the piece and then picking from that what I liked and wanted to keep. As I Am has a sweet sort of longing and pleading, shown with repeating phrases in a minor key that expand and change slightly as the piece develops. In terms of the message behind the piece, I think of it as reaching out to be noticed or to be seen. When I perform this piece, I think of lyrics in my head: “As I Am…. As I Am…Take me as I am” for the opening three phrases. While the piece is written out in standard music notation, each performance varies slightly because I improvise on and between certain phrases—making each performance a new experience. – Kate Amrine

Echo me(ii) for clarinet in Bb and trumpet’ is inspired by a series of ‘Echo me’, which is inspired by Volta performance by cirque du soleil in Montreal, 2017, which reminded me of my youthful days, chaotic moments, stillness and progressive time in my life. Also, ‘Echo’ infers a repetition of the reflection from somewhere, a person who reflects or imitates another, and a sympathetic or identical response, as to sentiments expressed, which is one of my important musical concepts by abstract and controlled musical materials in a form. Three sections,- A, B, and C-, and the short bridges in-between sections are bulit on each different scale structure that starts from the chromatic mode on E, ‘represents Me as mi’ to scale, 2(W)-1(H)-1-1-1-2-1-1-1-1, on Bb and m(minor)3-M(major)2-M1-M2-M3-M2-M1-M2- M3-M2-M1-M2-M3-M2-M1-M2-M3 on C scale is related by intervals until the end. Also, a thematic gesture at the beginning is segmented and developed as a reflection from A to B, B to C. – Jinhee Han

CLOSE FIGHT for trumpet, trombone (ad lib) soundtrack and video was written in 2014 for Stephen Burns with financial support from the FPK. Based on interviews with 2 boxers after a match that took place June 22, 2013 at the Barclays Center in Brooklyn, New York. WBA welter weight champion Paulie Malignaggi, hailing from Brooklyn, New York, defended his title against Adrian “The Problem” Broner, from Cincinnati, Ohio. – Jacob TV