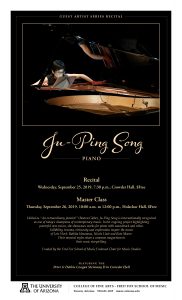 Hailed as “An extraordinary pianist!” (Boston Globe), Ju-Ping Song is internationally recognized as one of today’s champions of contemporary music. In her ongoing project highlighting powerful new voices, she showcases works for piano with soundtrack and video. Fallibility, trauma, virtuosity and exploration inspire the music of Lois Vierk, Rahilia Hasanova, Nicole Lizée and Kate Moore. Their musical styles share a common magnetism in their sonic storytelling.

Pianist Ju-Ping Song is internationally recognized as one of today’s champions of contemporary music. Her colorful and beyond-the-recital format performances have won her praise from critics as “an extraordinary pianist” (Boston Globe). In the process, she has inspired the creation and commission of new works by today’s under-40 and distinguished composers.

Sept. 20, 2022, marks the 70th anniversary of the first-ever public performance of "Bear Down, Arizona," the fight song that every Wildcat knows and the backdrop to celebrations big and small for decades.

Share in the comments your favorite memory of hearing the classic tune!

Are you a School of Music alumnus?
... See MoreSee Less

I was lucky to have the Lee family as neighbors growing up in the 1950s. Jack Lee once embarrassed a shy kid sitting on his front porch ... making up a song about me ("Blue Eyed Marylka"), singing while playing a ukulele or toy banjo. Red-faced then; fond memory today.

The University of Arizona’s faculty artist Fanya Lin, piano will be joining forces with Maestro Tagawa and the Tucson Repertory Orchestra to perform Grieg Piano Concerto in A minor and Rachmaninoff Piano Concerto No. 2. ... See MoreSee Less

Will this event Livestream tonight?

So, only the open rehearsal for this program? No other public performance? Thank you. LIVESTREAM would be great!!!