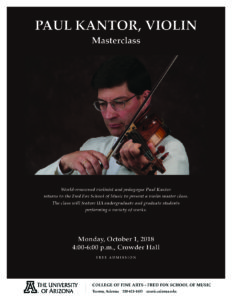 The University of Arizona Fred Fox School of Music presents a guest artist masterclass featuring world renowned violinist and pedagogue Paul Kantor. The masterlcass will be held from 4:00-6:00 p.m. in Crowder Hall on Monday, October 1, 2018. The class will feature the University of Arizona undergraduate and graduate students playing a variety of works.

Mr. Kantor will be performing the following day on the same stage at 7:30 p.m.

Paul Kantor is currently the Sally Shepherd Perkins Professor of Violin at the Shepherd School of Music at Rice University having previously served as the Eleanor H. Biggs Distinguished Professor of Violin at the Cleveland Institute of Music. He received his Bachelor of Music and Master of Music degrees from the Juilliard studying violin with Dorothy DeLay and chamber music with Robert Mann. For thirteen years he served as Chair of the String Department at the University of Michigan and has taught at the Juilliard School, the New England Conservatory and Yale University. He continues as Artist in Residence at the Glenn Gould School of Music/ Royal Conservatory of Music since his appointment in 2008. Along with his son, violinist Timothy Kantor, he founded and directs the Gabriel Del Orbe Violin Program in the Dominican Republic.

Additionally, he has presented master classes at the Starling-Delay Symposium, Indiana University, the Eastman School, the University of Southern California and the New World Symphony, among others. His students consistently win major awards at important violin competitions including the Indianapolis, Montreal, Stulberg, Buenos Aires, Klein and Fischoff.

For the past 37 years he has been on the Artist/Faculty of the Aspen Music Festival & School where he has been concertmaster of both the Festival Orchestra and the Chamber Symphony. He has performed as soloist with numerous symphony orchestras as well as serving as concertmaster of the New Haven Symphony, the Lausanne Chamber Orchestra and the Great Lakes Festival Orchestra. Kantor was a member of The New York and Lenox string quartets, the Berkshire Chamber Players and the National Musical Arts Chamber Ensemble in Washington, D.C.

Mr. Kantor has performed the world premieres of Dan Welcher’s Violin Concerto, (subsequently recorded with Larry Rachleff and Symphony II) as well as John Corigliano’s “Red Violin Caprices”. His recordings can be found on the labels of Equilibrium, CRI, Delos and Mark Records. In 2014 he was honored with the Artist Teacher Award from the American String Teachers Association.

He is married to pianist Virginia Weckstrom. 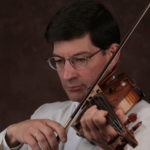