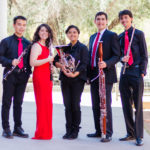 The new date is:

The Fred Fox Graduate Wind Quintet, the flagship student chamber music ensemble at the University of Arizona, will present a concert on Monday, April 23, 2018 at 7:00 p.m. in Holsclaw Hall.

The Fred Fox Graduate Wind Quintet introduces its sixth generation with new members hailing from China, Brazil, Mexico and the United States. Sponsored by a generous donation honoring renowned horn player Fred Fox, the ensemble benefits from instruction by each member of the Arizona Wind Quintet. Under faculty tutelage, the members’ performance, recording, competition and academic activities are designed to develop these young, talented graduate students as future professional musicians and entrepreneurs.

Created in 2007 as the Arizona Graduate Winds, the ensemble is now endowed and was re-named the Fred Fox Graduate Wind Quintet in recognition and appreciation of Fred Fox’s contributions as an extraordinary master teacher. Members of the quintet are chosen by competitive auditions and have received their undergraduate degrees from institutions across the country. They are mentored by members of the Arizona Wind Quintet, a faculty ensemble.

Past students in the program have achieved success in a variety of forums including numerous campus appearances, a concert tour in China, a recital in Alamos, Mexico, as part of the prestigious Dr. Alfonso Ortiz Tirado Music Festival, as guest artists of the Bisbee Women’s Club at their For the Love of Music series, and at the Arizona Senior Academy. Further achievements include appearances in Pasadena as finalists in the Coleman Chamber Music Competition and in Atlanta as finalists in the Music Teachers National Association Collegiate Chamber Music Competition. In addition, the ensemble has been heard on Arizona Public Media radio broadcasts.

Ivo Dae-Seong Shin de Souza began flute studies with his aunt Regina Lima at the age of 13. Soon after, he entered the pre-college program at Rio Grande do Norte Federal University (UFRN) where he studied with Rodrigo Gouveia. At age 18 he began his undergraduate studies with Alexandre Johnson at UFRN. During this time he participated in the university’s orchestras, performed in the Orfeo Concert Series, and attended master classes with Sergio Barrenechea, José Ananias, Jorge Salgado Correia, Julie Koidin , Toninho Carrasqueira and Philippe Bernold. Besides being an active performer, Ivo is strongly committed to teaching the flute. After finishing his undergraduate studies, Ivo was a substitute teacher at UFRN and taught flute for the National Program of Access to Technical Education and Employment (PRONATEC). He is now a first-year graduate student at the University of Arizona Fred Fox School of Music pursuing a Master of Music degree in flute performance under the instruction of Dr. Brian Luce.

Monserrat García Campos is a first-year graduate student at the University of Arizona Fred Fox School of Music pursuing a Master of Music degree in oboe performance under Dr. Sara Fraker’s mentorship. Before coming to the University of Arizona, Monserrat was active as a teacher and performer in Mexico. She was principal oboe in Orquesta Sinfónica de Michoacán, professor at Conservatorio de las Rosas, and teacher at Orquesta Comunitaria Sistema Michoacano de Fomento Musical – an organization based on the Venezuelan El Sistema. In 2009 she joined the prestigious Orquesta Sinfónica Juvenil Carlos Chávez, where she played both oboe and English horn for two years, performing under renowned conductors in both the United States and Latin America. In 2013, thanks to her excellent academic standing as an undergraduate student at Universidad Nacional Autónoma de México, she was selected for an exchange program with the Landen Konservatorium, where she had the opportunity to finish her music studies in Klagenfurt, Austria. She has participated in numerous master classes and workshops from renowned teachers such as Hansjörg Schellenberger, Thomas Indermühle, and Michael Turnovsky.

Anne Cotin completed her undergraduate studies at the University of California, Santa Barbara, where she earned a Bachelor of Music degree with an emphasis in horn, as well as a Bachelor of Arts degree in economics. During her time in Santa Barbara, she was a member of the UCSB horn studio and studied under Dr. Steven Gross. Anne performed in a number of ensembles on campus including the University Chamber Orchestra, UCSB Wind Ensemble, Maurice Falkner Brass Quintet, and Suzanne Falkner Horn ensemble. She also competed in the 2013 International Horn Competition of America. Anne attended the Summer Brass Institute at Menlo in 2015, where she took lessons and performed in master classes with members of the San Francisco Symphony. At the University of Arizona Fred Fox School of Music, Anne is beginning her first year as a graduate student in the Betty Katzen Horn Studio under the tutelage of Professor Daniel Katzen.

Jacob Fernandez earned a Bachelor of Music degrees in education and performance from Lawrence University in the spring of 2017. His time at Lawrence provided five years of training in classical and contemporary music with professor of bassoon Carl Rath, as well as attendance in master classes with professional bassoonists, including Susan Nelson March, Ted Soluri, Marion Rienhard, and Brad Balliet. Recent accomplishments include pit bassoonist for the 2016 season of the College Light Opera Company in Falmouth, Massachusetts, reed five instrumentalist, and the world premiere of “Ataraxis 2.3” for bassoon and electronics by Isaac Mayhew at the 2017 International Double Reed Society Conference. Jacob is currently a first-year graduate student at the University of Arizona Fred Fox School of Music pursuing a Master of Music degree in bassoon performance under the mentorship of Dr. William Dietz. After completing his studies, Jacob looks forward to finding performance opportunities and becoming a music educator for students of all age groups. 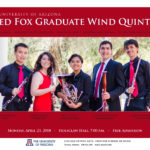