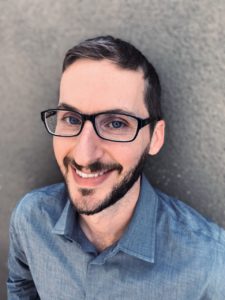 Fred Fox School of Music alumnus Russell Ronnebaum (MM Collaborative Piano 2011) is composing and performing during the pandemic. Ronnebaum works at The Rogue Theatre in Tucson as their director of music and resident composer. This summer, instead of a live theatre performance, the creative team at The Rogue Theatre is creating a digital presentation of an original play adaptation of Kate Chopin’s “The Awakening.” After rehearsing via Zoom, the actors recorded their lines in small socially distanced batches. Then that audio was sent to Russell to create an original score, which he was able to compose and record in his studio. That product was sent to a sound designer who mixed the audio and added Foley sound effects. The final step is the pairing of that audio with period-appropriate images of paintings, which were selected and edited by the director. “The Awakening” will be released in two parts and should be presented on The Rogue’s website, YouTube, and Facebook before the end of July. Watch this interview of Russell Ronnebaum in his studio as he prepares for “The Awakening.” https://www.youtube.com/watch?v=cDz-vlPZa4k&feature=youtu.be Pianist and composer Russell Ronnebaum holds a Master of Music degree in Collaborative Piano from the University of Arizona where he studied under Dr. Paula Fan. He has served as the staff accompanist for the Tucson Masterworks Chorale since 2015. For the spring 2017 Masterworks Chorale series, Mr. Ronnebaum performed as a soloist in Beethoven’s Piano Concerto No. 2. In 2019, Russell was named director of music and composer in residence of The Rogue Theatre in Tucson, Arizona. Mr. Ronnebaum also holds the position as the assistant director of music and principal accompanist at St. Mark the Evangelist Catholic Church in Oro Valley since 2017. Past performance and compositional engagements include Artifact Dance Project, The Rogue Theatre, the University of Arizona, Tucson Symphony Orchestra, American Wind Symphony Orchestra, and Tucson Masterworks Chorale, among others. His music has been played on Classical 90.5 FM Arizona Public Media, and 91.3 KXCI ‘Locals Only’ program. Russell made his Carnegie Hall debut in 2016 performing the music of composer Dan Forrest. Recordings, videos, sheet music, and upcoming concert dates can be found at: www.RRonnebaum.com