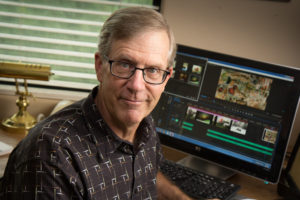 Dan Kruse, a graduate of the Fred Fox School of Music, will present the results of his musical research at the upcoming Music and the Moving Image Conference at New York University, May 31-June 2.
Kruse’s research project, “What You See is How It’s Made (Or Not!): The Music Video as Conveyance of Musical Form” is an examination of the efficacy of music videos in conveying musical form to viewers. The research grew out of his experiences in teaching UA School of Music courses in Rock and Popular Music and Music in World Cultures. It was initiated during his participation in a graduate seminar, “Analysis of Rock”, taught by UA Professor of Music Theory, Don Kinser-Traut, during the fall, 2018 semester.
“I’ve always been intrigued by musical form, ever since I started counting beats and measures and phrases in popular songs as a kid. I came to recognize that songs had specific “shapes”, the ways in which they were built and organized, and I came to appreciate how important form is in making a song effective and meaningful. But I found teaching the subject of song form to undergraduate gen-ed students to be challenging.
“During Professor Traut’s class in the fall ’18 semester, I developed a pilot study of the ways in which pop and rock music videos convey musical form through their visual approach. Don suggested I submit an abstract to the MAMI conference, and the resulting invitation to present the topic spurred me to do more formalized research over the last several months.”
Kruse recruited two UA students to help with his research – Ally Tessler, a Business Major focusing on Arts Management, and Jake Ransom, a doctoral student in Percussion Performance. The three analyzed a total of 19 music videos, and compared their findings, focusing on a handful that best conveyed musical form. The range of musical artists under study included Taylor Swift, Bjork, Ok-Go, The Police, Bruce Springsteen, Anderson .Paak, Pharrell Williams and others.
“The results of this study were fascinating. The closer we looked at music videos, the more we appreciated the subtle, even elegant, ways in which some music video producers accentuate and convey musical form in their creations. I look forward to sharing the results of this short-term study with the scholars in attendance at the MAMI conference in New York City…and to seeing the research expanded with the help of music educators in the future.”
Kruse is a graduate of the Fred Fox School of Music, earning a Master’s in Ethnomusicology in 2012. As an adjunct instructor at FFSOM, he has taught courses in Rock and Popular Music, and Music in World Cultures. He is also a frequent lecturer and music workshop facilitator in the Tucson area.
More information about Dan Kruse’s research is available by contacting him at krused@email.arizona.edu, or by phone at (520) 661-4742.