Member of the Graduate Faculty 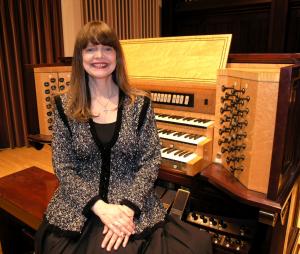 Dr. Pamela Decker, organist and composer, is professor of organ and theory at the University of Arizona. She earned the Doctor of Musical Arts degree at Stanford University and was awarded a Fulbright grant in 1980 to study organ and composition in Luebeck, Germany. She has won prizes in national and international competitions for organ and composition. Dr. Decker has performed extensively as a concert organist throughout the United States, Canada and Europe. She has ten CD’s (as performer or composer) in distribution.Twice she has appeared as a recitalist at the National Convention of the American Guild of Organists (AGO). She has performed as part of many other conferences and festivals at national and international levels.

Dr. Decker’s compositions have been performed in 19 countries by musicians from all over the world. She has been published by Wayne Leupold Editions, C. F. Peters, Augsburg, Hinshaw Music, Inc. and World Library Publications. Dr. Pamela Decker is represented by Phyllis Stringham Concert Management.

In 2004 she was awarded the Henry and Phyllis Koffler Prize for Research/Creative Activity at the University of Arizona.

In 2000 Dr. Decker was the recipient of the College of Fine Arts Award for Excellence in Teaching.