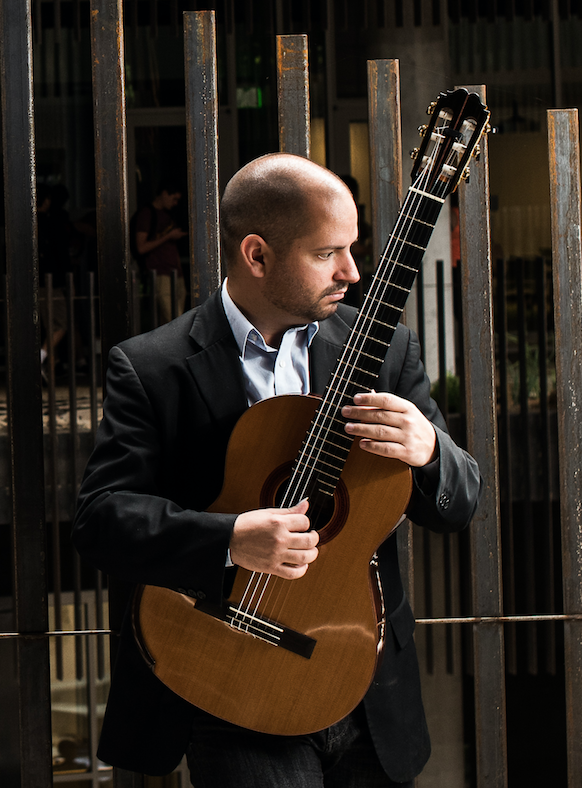 José Luis Puerta received his Doctor of Musical Arts degree in guitar with a minor in Ethnomusicology from the University of Arizona as well as a Master of Music, and a Bachelor's degree in guitar performance from the Conservatory of Music in Puerto Rico. He also graduated from the prestigious Escuela Libre de Música Ernesto Ramos Antonini in San Juan, Puerto Rico.

As an ethnomusicologist, Jose Luis's emphasis has been in Latin American music, focusing on plucked strings ensembles such as the rondallas, trios, guitar quartets, and on their use as a pedagogical tool. He has presented his research at the Ciclo Sonoro in Universidade Federal da Integração Latino-Americana in Foz do Iguaçu, Brasil; Osher Lifelong Learning Institute; the Fourth International Symposium on Latin American Music in Tucson, USA; and the Society for Ethnomusicology Southwest Chapter in Flagstaff, USA. He collaborated at the Society for Ethnomusicology 61th Annual Meeting as session chair in Washington D.C. He has contributed two entries for the Sage International Encyclopedia of Music and Culture (2019),” Reguetón,” and, “Lute Chordophones.” Also, he contributed guitar arrangements for the textbook, The Course of Mexican Music, Routledge.

As a guitarist, he has performed in Puerto Rico, Festival Alfonso Ortiz Tirado in Mexico, Canada, Spain, and throughout the United States. He’s been featured in the University of Arizona Alumni Magazine (Spring 2016), Acoustic Guitar (Fall 2017) and in Tucson Guitar Orchestra Strings Along, for Arizona Public Media. He has been invited to perform for the Treasure Coast Guitar Society and for the Sundays in the Garden concert series at Tohono Chul Park on numerous occasions as a duo, ensemble, and conductor. He is a founding member of  Grupo Riken, a Tucson ensemble that specializes in folkloric music from the Caribbean and Latin America. Their repertoire includes genres like the Cuban bolero, Puerto Rican jibaro music, Latin jazz, and bossa nova. The group's unique sounds come from folk instruments like the Puerto Rican cuatro, guitar, Peruvian Cajon, Afro-Caribbean percussion bongos and congas, accompanied by the guitar.

In 2019 He founded the Tucson Guitar Quartet In Spring 2020 they release the album Latin American Soundscapes, which includes. two performances and recording world premiers. An American in Bahia by Sergio Assad, and Costa-Tucson by Edwin Guevara. The group focuses on Latin American Music, and contemporary music.

José Luis joined the University of Arizona Fred Fox School of Music faculty as Assistant Professor of Music in General Music Education and Ethnomusicology, where he teaches graduate and undergraduate courses related to Latin American Music.

Music BA is a truly unique and really customizable degree that prepares you for a career in music or in any number of 21st century professions. This is an interdisciplinary degree that gives you the chance to explore music from exciting and diverse perspectives including a:

and many others. These are not inflexible and rigid degree paths but, rather, are examples of themes or areas of specialism that you have the opportunity to explore. You will work with your academic advisor and faculty mentor to devise a truly customized plan of study that connects a strong musical core to your chosen Perspective(s), courses from inside and outside of music, your minor, and potential second degrees or majors. Start by checking out:

“My experience both as a student and as faculty have helped shape my teaching methods and philosophies and offered unique experiences.”

Philip Hemmo, BM Guitar
....
Calling our music alumni! The Fred Fox School of Music wants to celebrate your achievements with you! Tell us more about you at the link below.


....
Philip Hemmo (University of Arizona B.M. 1991) is known throughout the United States as a teacher, composer, and performer of the classical guitar. As a former faculty member of the University of Arizona, Pima Community College, the University of Illinois, Springfield, and currently, Notre Dame Preparatory High School, and, Director of Guitar Studies for Northern Arizona University, he continues to foster the next generation of classical guitarists. Mr. Hemmo is the author of the guitar method text ‘Beginning Classroom Guitar’ (Thompson Learning 1998 & 2004, Open Source 2018) which is the textbook of choice for over 1,500 schools across the United States. His recordings ‘Guitar Works of Francisco Tárrega’ (2020), ‘Petite Pieces’ (2017), ‘Guitar Recital’ (2013), ‘The 20th Century Guitar’ (2012) as well as ‘Romantic Works for Classical Guitar’ (2010) have been released on the Project Aurora Recordings label to national acclaim.

music.arizona.edu/alumni
....
Oscar Macchioni, a native of Argentina, is an accomplished solo and collaborative pianist, professor, lecturer, author, and adjudicator. Oscar has performed extensively in his native Argentina, Italy, England, Poland, Serbia, Turkey, Mexico, Thailand, China, and the USA, at notable locations such as Weill Recital Hall at Carnegie Hall, Teacher's College at Columbia University, Steinway Hall, St Martin in the Fields and James's Piccadilly in London, the Querceto International Piano Festival in Italy, and the National Conservatory in Bueno Aires in Argentina. He studied piano at the Universidad Nacional de Tucumán (Argentina), the Krakow Academy of Music (Poland), Louisiana State University, and the University of Arizona (USA – DMA Piano). He is a Professor of Piano, Assistant Chair and Keyboard Area Coordinator at the University of Texas at El Paso.
....
Follow us on social media:
Instagram
Twitter
Facebook
YouTube
#WildcatForLife #WildcatStrong #FredFoxSchoolOfMusic #uazmusic #uazmusicalumni ... See MoreSee Less