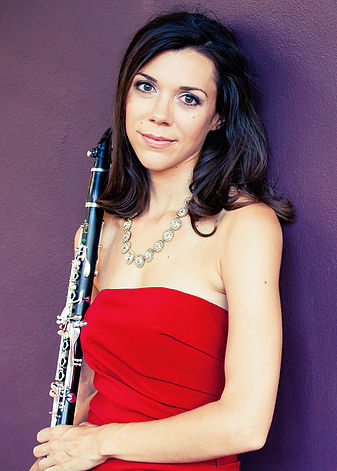 Hailed for her “robust playing and virtuosic performance” (San Diego Tribune) and “beautiful and clear tone” (The Clarinet Magazine), Jackie Glazier is an active soloist, chamber musician, orchestral clarinetist, pedagogue, and advocate of new music. As assistant professor of clarinet at the University of Arizona Fred Fox School of Music, Glazier is a committed pedagogue and mentor to future generations of clarinetists, and a member of the Arizona Wind Quintet. As a soloist and chamber musician, she has performed throughout the United States and in China, Mexico, France, Belgium, the Netherlands, Luxembourg, Croatia, and Carnegie Hall’s Weill Recital Hall.

As a soloist and a founding member of the saxophone / clarinet ensemble Duo Entre-Nous, Glazier is active in commissioning and performing new music. She has commissioned and premiered over 20 pieces with composers from the United States, Canada, France, Italy, Argentina, China, and Australia. Duo Entre-Nous has performed internationally are featured on the album, “Lights and Shadows, Waves and Time,” which was recently released on Parma Records.

Glazier performed regularly with the Orlando Philharmonic as principal, second, and e-flat clarinet from 2011-2016. She also served as principal clarinet of the Ocala Symphony, where she served from 2012-2016. Currently she performs with the Tucson Symphony and is principal clarinet of the Grammy Award-nominated True Concord Voices Orchestra. Orchestral collaborations include many internationally renowned artists such as Renée Fleming, Joshua Bell, and Yefim Bronfman. Jackie was the first-prize winner of the International Clarinet Association Orchestral Competition at ClarinetFest 2014.

An active clinician and educator, Jackie has presented guest master classes at major universities throughout the United States. She has earned degrees from Cincinnati College-Conservatory of Music, University of Florida, and Florida State University. Her teachers include Deborah Bish, Ixi Chen, Mitchell Estrin, Jonathan Gunn, Richie Hawley, and Karl Leister. Jackie was named one of the University of Florida’s Outstanding Young Alumni in 2018. She is an artist with Buffet-Crampon and Vandoren, and performs exclusively on Buffet-Crampon clarinets and Vandoren reeds.