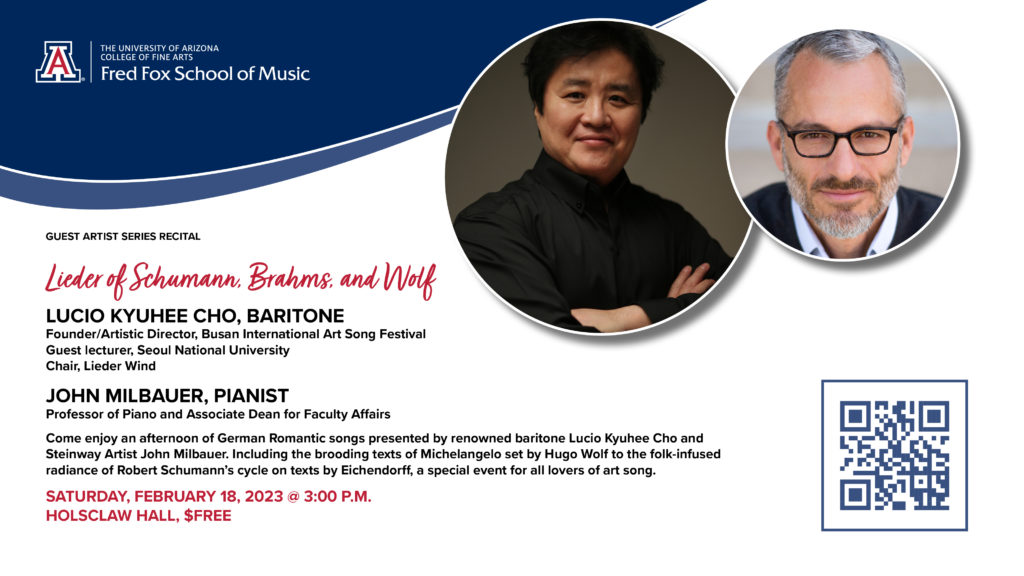 Professor of Piano and Associate Dean for Faculty Affairs

Enjoy an afternoon of German Romantic songs presented by renowned baritone Lucio Kyuhee Cho and Steinway Artist John Milbauer. Including the brooding texts of Michelangelo set by Hugo Wolf to the folk-infused radiance of Robert Schumann’s cycle on texts by Eichendorff, a special event for all lovers of art song.

The Artistic director of the Busan International Artists Song Festival (BIASF), baritone Kyu-hee Cho is striving to widen the development of the Korean artistic song stages. His album “Alte Liebe,” released in 2020, drew attention as the world’s first attempt to inspire listeners to create their own world of art songs.

After graduating from the Department of Vocal Music at Hanyang University’s College of Music, he moved to Austria, earning the highest diploma from the Vienna National Conservatory and the Vienna City Conservatory of Music.

While studying abroad, he won prizes from numerous prestigious international art song competitions in Europe, America, and Asia. This achievement is rare for Asian classical singers, and he is highly regarded as a German Lieder specialist.

After his study in Vienna, he has been actively performing in Vienna, the United States, and Canada. He has performed at prestigious international music festivals such as Austria Austarich Festival, Schubert Summer Festival, Steyer Summer Opera Festival, and Daegu Summer Festival in more than 80 concerts of Liederabend. In addition, he was featured as a soloist in numerous oratorio concerts such as Brahms Requiem, Mozart Requiem, Messiah, Elia, and Per Gynt and opera productions of Don Giovanni and 「Idomeneo. In 2010, he played the role of ‘Sigolhi’ at the Korean premiere of Alban Berg’s opera ‘Lulu’ with the Korea National Opera and as ‘Botan’ of Wagner’s opera ‘Siegfried’s Sword’ at the 2011 Korea Opera Festival.

John Milbauer, Piano
Steinway Artist John Milbauer has recently performed in China, Brazil, Colombia, Costa Rica, Mexico, Spain, Switzerland, and Japan as well as throughout the United States. France’s Republique du Centre has called him “a virtuoso of the first magnitude” while American Record Guide awarded him a Critic’s Choice—top 10% of reviews for the year—writing, “Milbauer employs a full expressive range, performs with astounding delicacy, and conveys unspeakable wonder through an intimate touch and astonishing versatility.” A laureate of the Orléans Concours in France for piano music of the 20th Century, he has contributed a chapter on the performance of the music of John Cage to The Pianist’s Craft series. His Humanities Seminar “Beyond Brahms at the Piano”—a twelve-hour multi-disciplinary lecture/recital on the fragmentation of compositional languages over the last century—won the Humanities Seminar Program Superior Teaching Award in 2020 from UA’s College of Humanities. A versatile musician, Milbauer has performed with the Mills Brothers and Pink Martini.

Milbauer studied music, classics, and government at Harvard College before earning degrees from the Eastman School of Music, The Juilliard School, Manhattan School of Music, and, as recipient of a Fulbright grant, the Liszt Academy in Budapest. He was awarded the Eastman Performer’s Certificate—the highest performance honor of the school—and was nominated for the Gina Bachauer prize for outstanding pianist at Juilliard. His teachers include Jerome Lowenthal, Ferenc Rados, György Sebök, Sondra Wilk, and Rebecca Penneys. Currently Professor of Piano and Associate Dean for Faculty Affairs at the University of Arizona College of Fine Arts, he also has been Co-Chair of the Chautauqua Institution Piano Program in New York since 2012, helping to transform it into one of the premiere summer piano programs in the Americas.